Order in the next 16 hours 54 minutes to ship tomorrow! *

The keyless option for door locks is very convenient in many ways and has become very popular for many door applications. Eliminating the need to carry any keys around makes keyless locks hassle free and its many other benefits may make it the right choice for your door as well. 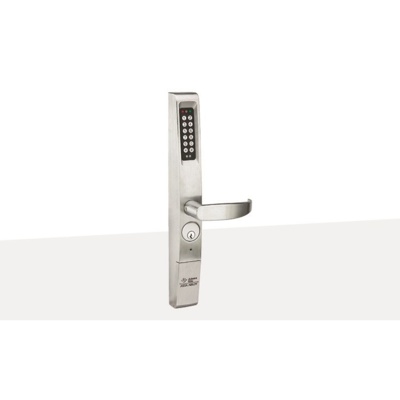 The origins of Adams Rite(R) date back over 100 years. Founded as Pacific Brass Mfg. Co., in 1896, the company originally produced ornate hardware for some of the old European style mansions then being built in Southern California. In 1927, the firm was purchased by a small group of stockholders and operated under the name Rite Hardware Company. One of the stockholders, Mr. George R. Adams, purchased the company, and in 1931, his son, Arthur R. Adams, joined him in operating the business as Rite Hardware Manufacturing Company.

The company foresaw the growth of the aircraft industry and began diversifying to produce locks, latches and handles for aircraft. In 1936, the company turned out the first locks ever developed for this specific purpose, installed on the Douglas DC-3.

Recognizing the growing need for aerospace hardware, the aircraft product line was expanded. In 1945, Adams Rite Manufacturing Company was incorporated and began developing along two distinct lines - architectural hardware and aircraft hardware. The two divisions were separated into distinct companies. The Architectural Hardware Division moved to Los Angeles, and the Aircraft Division remained at the Glendale location.

In 1981, the company was sold again, and the two divisions were eventually consolidated in a single plant in Fullerton, California. In 1999, the aviation division was sold, and in 2006, Adams Rite(R) Manufacturing was aquired by the ASSA ABLOY Group, the global leader in door opening solutions, dedicated to satisfying end-user needs for security, safety and convenience.

Adams Rite(R) designs, manufactures and markets door and door hardware products to the commercial, industrial and institutional construction industry both here in the US and abroad.