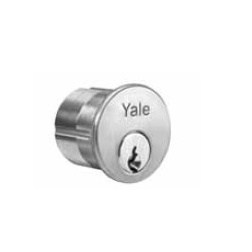 The Yale 2153 series mortise cylinders are used in most Yale mortise locks and come with the 2160 cam.