Order in the next 33 hours 33 minutes to ship tomorrow! *

Browse through our extensive selection of rim exit devices for the one that is most suitable for your application. We proudly stock a large variety of devices, from numerous leading brands, to bring you the best quality hardware for all your door needs. 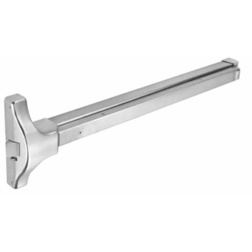 Yale 2100-36-689 is a medium duty rim exit device with a combination of sturdy construction and innovative security features, it's easy to see why building owners and architects alike prefer the 2100 Series Exit Device for all their economy applications. It is non-handed for easy installation and it is designed for wide stile doors.