Order in the next 2 hours 4 minutes to ship today! * 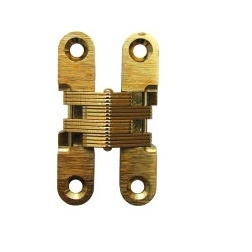 This Soss 101C-US4 light duty invisible hinge is for wood and metal applications. This hinge measures 1-11/16" in height and is designed to fit doors with a minimum thickness of 1/2". It will allow doors to swing a full 180 degrees. Consult the sizing chart in the Instructions and Templates tab to determine the number of hinges you will need. 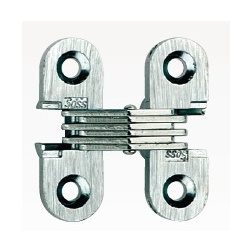 This Soss 103C-US4 is a light duty invisible hinge for wood and metal applications. This hinge measures 1-1/2" tall and it is made to fit doors with a minimum thickness of 3/4". This hinge will allow doors to swing a full 180 degrees. 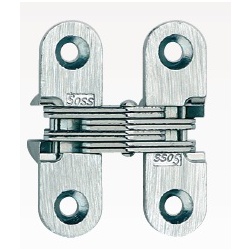 This Soss 203C-US4 is an invisible hinge designed for light duty, wood or metal applications. When the door is closed this hinge cannot be seen or tampered with and when it is open, the riveted hinge pin cannot be removed. 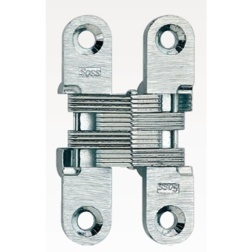 This Soss 204C-US4 is an invisible hinge that is 2-3/8" tall, designed for light duty, wood or metal applications. This hinge requires a minimum of 3/4" door thickness and it opens a full 180 degrees. Hinge is supplied with the satin brass finish. 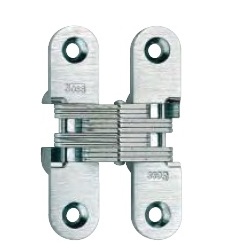 This Soss 208 is a medium duty, single action, 2-3/4" tall invisible hinge for wood or metal applications. Requires a minimum door thickness of 1" for use. Consult the sizing chart in the Instructions and Templates tab to determine the number of hinges you will need. 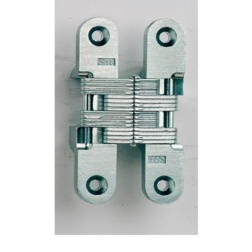 This Soss 212 is a medium duty, 3-3/4", high invisible hinge designed for wood and metal applications, with doors measuring a minimum of 1-1/8" thick. These hinges are packed 1 per box. 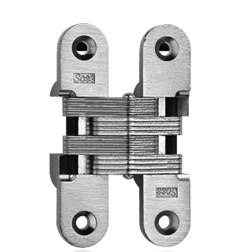 This Soss 216 is a 4-5/8" tall wood or metal application invisible hinge. It is available in a wide variety of finishes to suit your taste and the aesthetics of your application. Requires a minimum door thickness of 1-3/8". 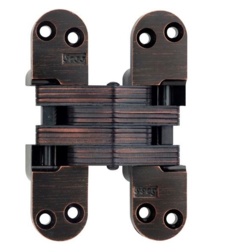 This Soss 218 is a heavy duty invisible hinge for wood and metal applications. It measures 4-5/8" in height and requires a minimum door thickness of 1-3/4" for proper use. 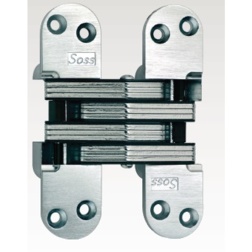 This Soss 220 is a 5-1/2" tall invisible hinge for use on wood and metal, heavy duty applications. It requires a minimum door thickness of 2".

Joe Soss, inventor of the Soss Invisible Hinge, packed a lot of living into seven decades. Arriving in Montreal in 1894 from his native Rumania, the energetic young man started out as bricklayer and moved to Cleveland after hearing about a construction boom there. He soon became a contractor, building homes, stores, and schools. Several years later he won the bid to build the new state capitol in the fledgling state of Montana, and promptly headed 2,000 miles west to Helena to tackle the project. Completing the structure in 1902 (the building remains in use today), Soss was off to Butte, a hundred miles south, where a copper mining boom was underway. The growing city needed schools and Soss began building them. The U. S. had annexed the Philippines after the Spanish-American War and Soss couldn't resist the lure of starting another business. He sailed off to Manila where he built flat bottom boats that transferred freight from ships to docks. He left the country during a cholera epidemic, and stumbled on a protruding cargo hold hinge while strolling on deck during the voyage home. Sometime between his fall and the moment he picked himself up, the idea for the invisible hinge was born. A century later, his idea lives in millions of SOSS(R) Invisible Hinges in buildings and homes around the world, and in elevators, computers, jet planes, and wherever concealed hinges open and shut doors and lids. Soss managed the growing company for more than 25 years and was succeeded by his two sons, Sam and C. J. In 1940, they moved the operation to Warren, Mich., a Detroit suburb, to be closer to automotive customers. By 1960, the company had gone public, and Sam's son-in-law Hal Marko became president. During the next three decades dozens of industrial and electronic firms were added to the company roster, increasing annual sales to over $250 million. In 1972, the hinge business relocated to Pioneer, Ohio, where it remains today and is called Universal Industrial Products (UIP).
9 items Scroll to see more below